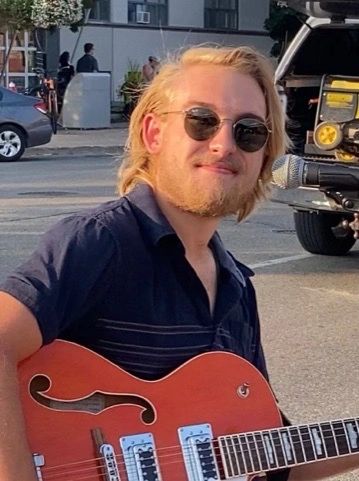 Singer, songwriter, musician, Clark Schlesinger  was born and raised in Mississauga Ontario. Clark has been  producing and performing since the early age of at 10 years old. In the early days Clark  could be seen as the drummer lead vocalist for a band called LINC. He has impressed audiences for years at the  Hard Rock Cafe in Niagara Falls, and it continues to be one of his favourite regular gigs during  the summer months, . In recent years, accompanied by his acoustic guitar, Clark's music is  enjoyed in many pubs, clubs, bars, markets, special events, festivals, and private  events across Ontario as well as special guest performances in Bahamas and New Zealand. Clark's genre and style is a mix of classic, alternative and pop tunes with an additional influence of jazz and the blues.  He covers an endless number of songs and additionally writes and performs his original music.

Clark has entertained for audiences of 1000's.  He has sung with Eric Church, and opened for a benefit headlined by Belinda Carlisle.  Clark has taken the main stage at festivals including the Main Stage at the Canada 150 celebrations-Ontario Place, Toronto  and Mississauga's Canada Pavilion Carrasauga.  Clark has shared his gift at Port Credit and Dundas Buskerfests and entertained for large corporate events including the Princess Margaret Foundation.  He is very involved in Mississauga with the community, bringing song and leadership (hosting Open Mics) to local bars, restaurants, special events, markets and private functions. Essentially ready to bring music and song to any function requiring it.

THE GRAND OPTIMIST....COVER BY CLARK

Singing from Home during COVID 19

Check out this great video

the grand optimist .....COVER BY CLARK

A SHORT VIDEO WITH A FEW CLIPS OF 3 RECENT PERFORMANCES.

Link at the bottom of the page.

Clark sings a great rendition of the song Dreams made famous by Fleetwood Mac.

Clark sings an amazing cover of the song, I'm Yours by Jason Mraz

Check out this great video

For a great interview about Clark check out the video below!

Better yet, see us in person!